On Saturday, October 4, 2014, BLW UK Zone 2 hosted a special miracle crusade at the illustrious Excel Centre in London. Over 4,000 expectant delegates from all over the United Kingdom, Europe and as further afield as Dubai, were in attendance. Long before the program was slated to commence, many were at the gates, refusing to be deterred by the long queue. 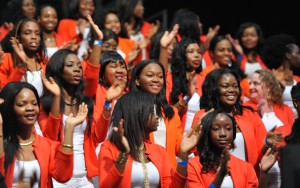 The Choir sings praise and worship

The choir, dressed in white and red, electrified the atmosphere, stirring the anointing for the miraculous. In the testimony talk show segment, a joyous couple spoke of the miracle of their baby after 6 miscarriages, having received a word during a previous Zonal Leader’s Meeting. As the congregation heard this and other testimonies, their hearts were ripe, and their faith increased for their own miracle.

Upon the Zonal Pastor, Pastor Uche Onubogu’s mounting of the pulpit, the excitement reached a crescendo in the hall. Pastor Uche, in his message, proclaimed that nothing is ever late, citing the example of Lazarus. Pastor Uche further inspired the hungry souls present, reminding them that the Master’s confidence was in the power of His word, irrespective of any circumstances.

Many miracles were recorded at this event, including a young man of 25 years of age who was healed of a terminal illness; he had been blinded by eye cancer, but he left the auditorium with his sight and health. A family that had been plagued with several cases of cerebral palsy received their miracle as well. Deafness, lameness, cancer, arthritis and other diseases all bowed to the name of Jesus.

Many gave their hearts to Christ at this program, with over 2,000 first-timers in attendance. Truly, this event has been recorded in the Book of Acts as a chronicle of the miraculous life of saints in the BLW Nation.